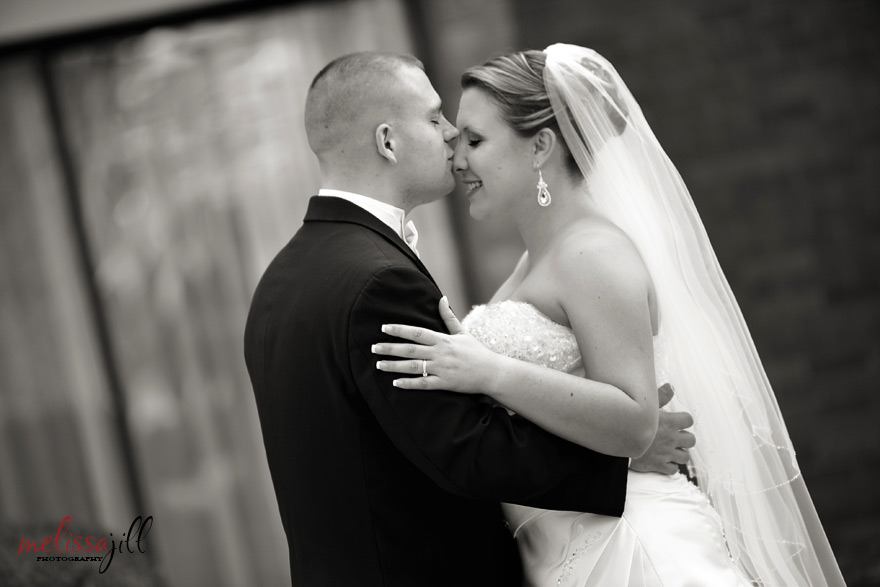 Danielle & Vinny were married two years ago today on 10.10.10 in Fredericksburg, Virginia. It's hard to believe it's been that long already!! I specifically remember how sweet these two were with each other. As I said in my original blog post of their wedding photos -- If ever there was a groom who cherishes his bride and shows it openly, it's Vinny. He must have said "I love you" 50 times that day.

Today, in honor of these two, I asked them if they would be willing to share their favorite wedding photo and why it's so meaningful to them. They picked this black and white photo from their first look and I was floored by what they wrote. I had no idea that they have been through so much already in their two short years together.

Danielle writes: "What a lot of people don't know is 6 months after Vinny and I got married Vinny became very sick. It began with short term memory loss and progressed into joint pain and periods of disorientation. I started noticing symptoms in April 2011. Vinny began to lose hair and broke out in a rash. I took him to the emergency room in August of 2011 and then we were back in the hospital in February of 2012. We were off to appointment after appointment. In April of 2012 Vinny was diagnosed with an autoimmune disease called Lupus. Vinny was also diagnosed with Raynaud's Syndrome which affects his hands and feet and is secondary to the Lupus. We were so thankful to get an answer to the body aches and pains, rash and hair loss but we still did not understand what was going on with his memory. I began to notice little things in January 2012 -- periods of disorientation and Vinny repeating the same stories over and over again. I kept a journal and documented all of his symptoms, appointments, medications and doctors. I pushed and pushed for answers. I had done some research and started thinking that Vinny was possibly having seizures. I began to You Tube some seizures that were associate with Lupus and then one day as we were walking through Lowe's, I caught an episode and pulled out my camera and started videotaping. I was shaking and so nervous but that video was the answer to our prayers. We got in to see the doctor and Vinny was diagnosed with complex, partial seizures. Vinny has been on Keppra for the seizures since July and has been seizure free for almost 3 months.

Our wedding pictures mean the world to us. When you get married you never think the "in sickness and in health" part will be 6 months after the wedding. We always thought if that happened it would be 30 years down the road. If we can make it through this last year, we are confident we can get through anything. Our marriage decided to throw us a large bump in the road early on, and we are okay with that. Our marriage is stronger than ever because of that bump.

Vinny and I picked out the same photo. The black and white picture of Vinny kissing my nose. It's one of the pictures that was taken during our first moments of seeing each other. This picture captures all of the love and happiness we have for one another. We truly love and respect one another and cherish our relationship. Even more so now as husband and wife."

And Vinny adds: "You asked me what my favorite picture was. It is definitely this one. Every time I look at this picture I see everything I always wanted in my life. I see someone who will love me for who I am, no matter what. Someone who will stand by me, and never hurt me. This shows a moment you can't fake; true love. This was the start of our story. Every day being a new page, and every year a new chapter. This reminds me how much I love Danielle. And how that love will only grow stronger with each page; and how we will only get closer with each chapter."